“He made you happy”

Mark was one of those people that always made you happy you ran into him. I always enjoyed stopping in to say ‘hi’ to Mark and his roomate Chris Nixon on my way up or down the stairs of the 5th Co barracks, because it was always nice to see ‘normal’ (that is, non-Band) folks now and then, it validated my need to occasionally feel a little less pigeonholed as a geeky guy who played circus music on a silver tenor sax during his time off after class. But most of all, Mark always made me smile. I don’t recall ever seeing him upset or angry, and I don’t think he had a mean bone in his body. Nowadays we don’t say that someone has a ‘twinkle in his eye’ much anymore, unless we’re talking about that ‘Night Before Christmas’ poem, but if anyone I’ve known ever did, it was Mark. Hands down. 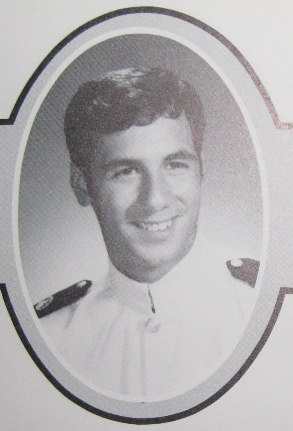 I will always remember how Mark once showed me the ‘lawnmower’ dance at a mixer, wherein you went through any and all motions of trying to pull-start a recalcitrant lawnmower (including kicking it), best done to the Stones’ “Start Me Up”. That was classic Mark – understated and playful humor.

I also remember giving him a ride once in my BMW 2002 down the GSP to his hometown of Cranford when we were both headed home to our Jersey hometowns for the weekend. I don’t recall anything particular about that ride, except that the time seemed to pass easily.

“One of my favorite people I have ever met”

Here is a short tale about one of my favorite people I have ever met
It was the summer of our junior year when Mark Paradiso and I were shipmates on the President Taylor (APL) sailing to the Far East. Mark and I hit it off from the beginning and became great friends from the start. Of course it wasn’t hard being friends with Mark as he was such an easy-going person with a great sense of humor. We soon settled in to a routine of training for the fall sports season by working out in our room and listening to the one and only cassette tape we had that contained a mix of 70’s hits that I still can hear playing in my head today (867-5309 by Tommy Two Tone-ugh).

While we had many adventures on that cruise, especially Pusan, Korea which is quite a harrowing and sensational sea story if you ever care to hear it and want to know why Mark’s quote in the yearbook is “It’s been a long time since Pusan”, the one story that is most dear to me is our adventure in Hong Kong.

Mark and I had decided that it would be quite appropriate to get tattooed in the Orient just like sea-faring sailors of yore, and not unlike the swashbuckling pirates we envisioned ourselves to be. So, I drew up a simple tattoo that we both agreed upon. Shortly after, when we tied up in Hong Kong, off we went to find us a tattoo parlor. Of course we first decided to find us some refreshment and respite from the long voyage across the Pacific and ended up in the Peninsula Hotel (of James Bond fame of course) drinking sake and beer-I think. After drinking up some courage, we continued our adventure into the streets of Hong Kong looking for a rickshaw. We hired a driver who understood some English, enough to know that we wanted to eat and then get tattoos. So off we rode, our heads a bit clouded from the sake and our stomachs now a bit queasy from the combination of the ride and whatever weird sea creatures and caged animals we ate from the local vendors that we probably should not have.

We arrived at what appeared to be a row of apartments with clothes hanging to dry above our heads in the alley. At this point we became a bit suspicious and wondered to ourselves if we really were up to being swashbuckling pirates (a feeling we had many times together in our adventures). We decided to trust our driver and the old man lead us up the stairs. To our surprise, and relief, there indeed was a tattoo parlor on the second floor. Not aware of any of the hazards or maladies one could get from getting a tattoo (who knew at that time?), I handed the tattooist my drawing that Mark and I wanted tattooed on our left shin, just above the ankle. The man agreed and for a few dollars Mark and I endured what amounts to self-mutilation and agonizing pain; but we got a couple nice tattoos. 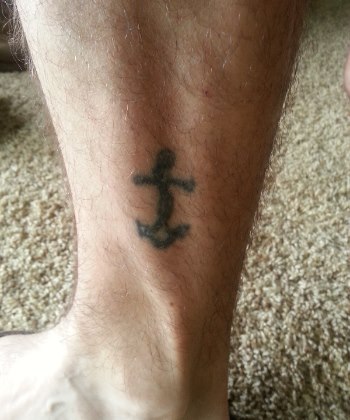 I carry this badge of honor to this day as a constant reminder of my friend, my shipmate, and one of the kindest, selfless, fearless, warm, and funniest men I have ever known. I have provided a picture of the small anchor tattoo that brings a smile to my face every time I look at, or someone asks me where I got it. Yes, Mark, it has been a long time since Pusan, but it seems like yesterday that we were there. You were a blessing in my life and to all that knew you.
Rich Colonna