Doug Ullman shares his status:
Barbara and I purchased a brand new home in Clemmons, NC (just west of Winston-Salem, and moved in February. I’m still with GDIT as a Business Process Analyst, Senior Advisor/Master Scheduler, and head their Program Controls Center of Excellence in addition to leading the EVM & Scheduling Group for one of GDIT’s major clients, the Center for Medicare and Medicaid Services. We have two grandsons: George (coming up 6) and Charlie (2-1/2).

Lee Forsgren (former Deputy Assistant Administrator for Water at EPA and Assistant Administrator for Legislative Affairs at NASA) contributes:
Sean Connaughton and I have gotten through the election season. In doing so we did several fundraising events for several candidates. One event we did at Sean Connaughton’s house were fortunate enough to do one for a Kings Pointer Sang Ye ‘01. Attached is a picture of all the Kings Pointers at the event.  Photo includes Melissa Mejias ‘06 (worked with me at EPA), Sean Connaughton – Former Maritime Administrator, Secretary of Transportation in Virginia, Steve Blust ‘71 (former Chairman of the Federal Maritime Commission), Sang Ye ‘01, Lee Forsgen, Wes Sterns ‘93 (Real Estate entrepreneur)


Had a good outing beginning of OCT, while over in New Orleans.   Put together a T/M for my brother Jim Murphy ‘73 and me to go over to Stennis Space Center in MS.  Met with the G.M. for Aerojet Rocketdyne – Mike McDaniel.  He hooked us up with a great tour of the NASA rocket test stands, where we were able to go up on the largest one. Which is 300’ tall.  As an aside, Mike Booth informed me that the huge crane at the top was installed by his former company American Hoist & Derrick. These stands have tested rocket engines from Apollo to the current Artemis moon programs. We met some true rocket scientists that explained what they do there.  We were lucky as there was a rocket engine in place for testing, making it even more interesting.

We also visited the production facility where the rocket engines are assembled.  It was interesting to see the technicians putting these together.  They even found that it was easier on the personnel to build them upside down!  In one of the photos with the Artemis engine, you see us putting our thumb prints on the nozzle.  This will send our DNA into space! 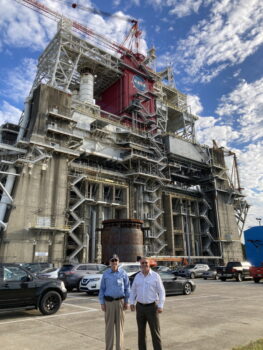 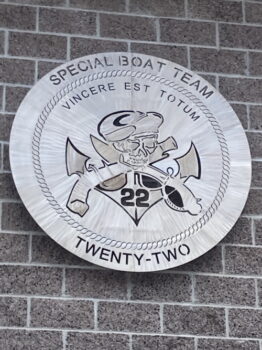 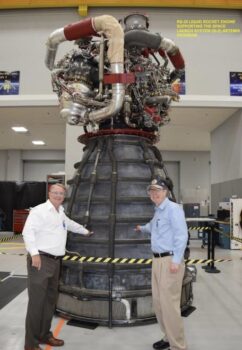 The second stop was Special Boat Team Two Two.  The civilian operations officer and former boat unit senior chief welcomed us “old timers” for a great tour of their facilities.  My brother Jim was in Coastal River Division Two Two in New Orleans as a reservist commanding Swift Boats after graduating in the seventies. I popped into the next generation, Special Boat Unit Two Two as a reservist in the late ‘80’s.  This unit is now an active unit for supporting SPECWAR and features the SOC-R riverine waterjet craft.  It makes you realize how the years have flown by when we looked at the C.O.’s listed in the quarterdeck area and we looked back who we served under.  Riverine Special Warfare years hold a lot of good operational stories from our reserve lives!

While in town, Gretchen and I were able to meet up with Jim & Anne Quern.  Had a lot of catching up to do with them and all the activities going on.

Bumper Kunkle shares:
Maria and I are settling in nicely here in Monterey, TN.  We met Tom and Sue Bodman in Nashville back in October (photo is attached).  They were on their way back to Florida from Montana.    Tom and Sue having fun traveling in their RV seeing our great country.
I got to see Steve Dear (KP’85) and Pete Brennan back in New Jersey in early November.  Unfortunately, the circumstance was sad, it was a memorial for Steve’s dad.  Mr. Dear was a great guy, friend, mentor, brother-in-law, and father to many KPers.  Klaus Rohr (’62), Gene Mattioni (‘62), and John Mattioni (’57) were the other Kings Pointer present.
Pete is living in NC with his wife Ella.   He is still the funny, witty guy we knew back in college.

Ted & Marie Hercamp vacationed with Tom & Martha Teefey at the Oasis at Death Valley. What an amazing place! We also spent some time in Las Vegas enjoying Miranda Lambert, High Tea at the Waldorf Astoria and dinner at the Prime at the Bellagio.   Of course not everything could stay in Vegas. Here is a picture of the guys with their new “fancy friends”. Fun times!

Ronda Cobb adds:
For National Wreaths Across America day on Dec. 17, 2022 I have been selected to represent the US Merchant Marine and our Academy Battle Standard at my local ceremony.  If anyone has not gone to one of these events, they are truly touching and inspiring.

Mickey Cunningham and our Reunion Team continue to reach out for contact info from many “missing classmates”. Please see that list at home page of kp83.org so we have a shot at seeing them at Homecoming. All will be informed as soon as date is set!