Dan Rohde starts us off with some great photos:
Thanks for keeping us all connected, it is much appreciated and grows in importance as each year goes by. Great to hear so many of our classmates talking about Grand kids and retirement.!! 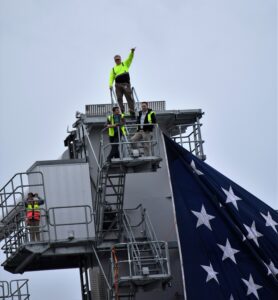 Latest set of new cranes delivered to Savannah earlier this year. As has become tradition, I bring a 50’ x 100’ US flag out on the Pilot boat and “wrestle” it up on the ship and then up the forward crane for a great ride up the River (that’s me on top of the leg of the crane).! I also brought my 6’ x 12’ KP burgee, but if you look closely the US flag dwarfs the KP burgee flying below. This year we fun fund raiser and the GA Tech. Alum. outdid the GA alum, thus the 30’ x 50’ GA Tech flag flying from the aft crane below the US flag.

Carrie and I are doing well here in Savannah through this “COVID nonsense” and have managed to get out and spend a little time with the kids and grand kids once or twice (Miami, Maryland, Rhode Island and New York – please don’t tell Gov Cuomo).


One Trump flag flys in our backyard and the second is for the boat. The mask is from a friend of mine for Carrie’s 90 year old Dad, who tried to wear it into vote earlier this week – Carrie was able to remind him that it is not appropriate at a polling location (I think he would have been ok here in South Georgia). The other pic got included by accident but is our youngest (Dana 24 in the USCG) with our oldest Grand daughter Annie from our oldest (Krysta 30 and Matt, both in the USCG).

Al Reeves sent a photo of his daughter getting engaged in late summer. 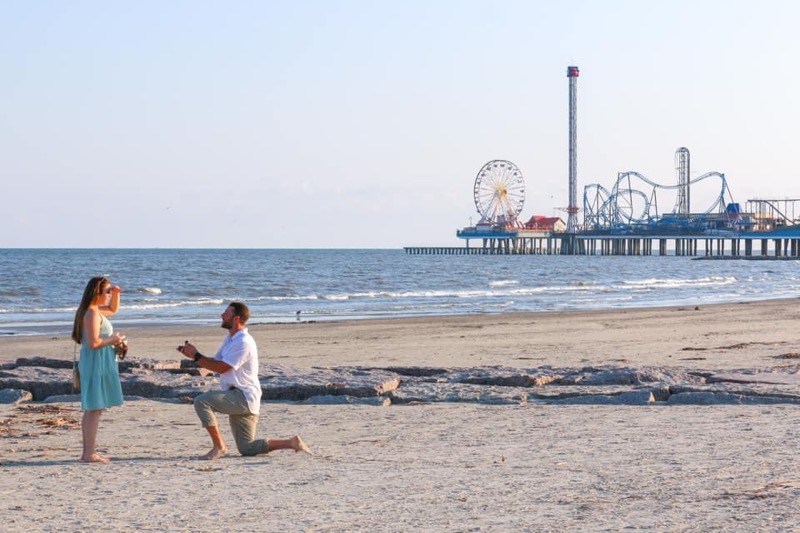 Brian Foy contributes:
Ray…Karen and I recently had dinner in St. Augustine with Scott O’Connor and Glenda O’Connor ’85. Scott is a St. Johns River (Jacksonville) pilot and he and Glenda were enjoying a few days of relaxation here at the beach. We had a great time catching up, discussing classmates, kids and grandkids (coming soon). Apparently Joe Walsh recently blew threw St. Augustine and never called…”C’mon Man!” We look forward to seeing Scott and Glenda again soon to enjoy St. Augustine’s “Festival of Lights.” The whole city lights up like a Christmas tree for two months – a must-see for those who have never been here.


As for me, I continue to work on my golf game when I am not working on legislative matters for the USMMA-AAF. I was runner-up in our Club Championship, losing only to a 24-year old former Flagler College golfer. Chalk one up for the old guys! While I am in regular contact with staffers on The Hill, I have been unable to travel to DC due to COVID restrictions. I look forward to getting back up there when the new Congress convenes in January. 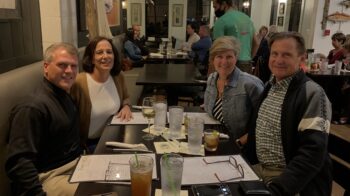 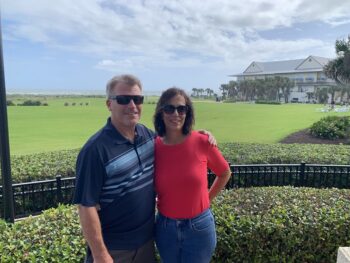 I hope you are staying healthy. Next marathon? Thanks for all you do, Shipmate. Long live the Tuna Boat! — Brian

Pete Lafontaine shares:
I received the Fall edition of the Kings Pointer magazine the other day and read about many of our classmates who have recently retired. Well, add my name to that list too. I retired in September after 35 years in the marine insurance business. My wife and I are living on Cape Cod and enjoying the beaches, walking/biking trails and all the great restaurants.

Rex Gundle relates:
Last Friday (11/13) I had made arrangements to meet up with Mike Curtiss for lunch, and before you know it Mike (aka Dirty Curt, now Capt. Courteous) used his speed texting app to reach out to find other classmates in the area willing to come up to the Woodlands for a get together. I will say that I was thankful for a good turnout (outstanding 6B representation), a lot of laughs, good stories and not a single word on politics.


Mike brought his lawyer, Tom Lightsey to ensure we all played by the rules, and others present included Kurt Larsen, Mike Booth and yours truly. We missed out on George Toma attending, but I hope to see him on the next trip.
It is amazing that we seem too young to retire, but Mike B and Kurt spoke of its benefits, while Tom and Mike C have no plans to retire at this point (which may annoy Mike’s son who wants to join his beloved Pilots Association). I have enjoyed being back in the USA for the last 16 months after a 22 year overseas adventure, and still working but have put a date on the calendar for retirement.

I understand that Houston holds a large contingent of our classmates, and look forward to a few more trips in the future.


Classmates – As many of you know, I partnered with five Coast Guard and one Navy colleague to form 6 Bears & a Goat Brewing Company about 4 years ago. The 15-barrel brewery and full restaurant are thriving in Fredericksburg, VA. We typically have about 18 styles of our beer on tap at the Brew House and distribute throughout the state of Virginia. We also have a full bar (and craft seltzer) for those who aren’t quite into the craft beer scene. As a tribute to all Kings Pointers, we will release KP-142, Classic American Pilsner in mid-June. Don’t miss out on this amazing Pre-Prohibition Lager. It will be available on tap and in 16 oz. 4-packs. Stay tuned on Facebook @6bearsandagoat for the actual release date. We expect to have this rotational style available through July, maybe August.

Here’s the romance language you’ll find on the label. Rex Gundle (Principal 6B&G Investor) and I had fun crafting this one:

The U.S. Merchant Marine Academy at Kings Point is privileged among the nation’s five federal academies to be the only institution authorized to carry a battle standard as part of its color guard. The proud and colorful battle standard perpetuates the memory of the 142 Kings Point midshipmen who died in service to their country during World War II. Kings Pointers have served selflessly in every major conflict the country has been involved in since World War II. Like Kings Pointers, KP-142 Classic American Pilsner is distinguished in its field; it exhibits a bold character and robust flavor profile that speaks for itself. Acta Non Verba!

Consider making a trip this summer to the 6B&G Brew House. Flag me down, or if you happen to catch me off duty, let the manager know you’re KP83 and I’ll make it well worth the trip. Prost!
Hope to see you soon – Mark

I had a great conversation with Quentin Franklin, discussing the good old days, Navy, running, not running, and running injuries. Q breaks his longtime silence from this column:

Ray, During the lockdowns I’ve been making a bucket list of things I wished I had done and a class update was right behind spatchcocking (legal in Virginia) my Thanksgiving turkey and a colonoscopy. Both went well, thank you. I became a little nostalgic watching the Mariners trounce the Coasties (I refuse to call them the Bears) on ESPN-3 this past weekend. In 1982 our Senior class (Logan/Fauvell et al) was the first KP team to win the then Secretary’s Cup (now Secretaries’ Cup) which was instituted only the year before. Oddly, those are the only two KP football games I’ve ever seen, in both cases due to being on some type of “restriction.” Great games. My wife, Fran, is an ’86 USNA grad and the level of competition rivals Army-Navy without all the glitz and hoopla.

Anyway, I’m in Va Beach, VA and have an ophthalmology (did I spell that correctly?) practice in Norfolk and Elizabeth City, NC which keeps me out of trouble and three pretty self sufficient kids. When I retired out of the Navy 13 years ago after flying carrier onboard delivery (the lithesome C-2 Greyhound) then medical corps, I got a golden-doodle, Oscar. I never sailed on my license which is probably fortunate given my most recent pleasure boating misadventure. I never remember being specifically told that a 25 hp outboard motor not properly secured to the transom could launch you out of a Jon boat into the cold November bay water. Fortunately Oscar was the only witness. I’ve never seen a dog so embarrassed for his owner. Stay safe and be well! Q

My Sea Year shipmate Mickey Cunningham contributes:
2020 continues to be the year of the pandemic but we’ve seen classmates after escaping to our home in Jupiter Florida. On consecutive weekends we hosted John Rhatigan and Jim Goulden and then Sherry & Jeff Coons and Scott Metheny.
I’m getting all of them psyched for our 40th reunion which is right around the corner!


From Ray: My web design business remains strong and is immune to the pandemic. By the time this is in print, the vaccines should be starting to help more of us attain immunity. Stay healthy!