Mark Suter shares:
I was lucky enough to catch up with Craig Ellixson last week in Miami for dinner during “Spice week”. We had a fabulous dinner at Il Mulino and a great view of the beach. Craig filled me in on his trip to South Africa earlier in the summer and we caught up on families, work, etc.

Mathew Bucherati sent a photo displaying how his family continues to grow:
We held our family reunion at our mountain house this past fourth of July including Sara, myself, our four kids, their spouses and our seven grandchildren. There were actually 17.25 of us there since my youngest daughter, Rosie, is pregnant with her first and due in January. We have been so blessed as a family. I am still enjoying my career at Pepsi-Cola, now in its 34th year. I have been doing a tremendous amount of international business travel in recent years, so it almost feels like my sailing days again except much nicer ports of call. Sara tags along on many of these trips as well. Retirement is probably not too far off and Sara and I look forward to living full time in the Blue Ridge mountains of NC.


A.J. Murphy writes:
We have been trying locally to get some folks from the class together here in Houston for a catch up outing. Earlier Mike Curtiss was playing a big part in pulling some of us together and I was able to have a great visit with both Scott Hart and Mike Curtiss at a coffee shop in town.


With schedules being what they are, we were finally able to pull one together and four of us got underway on the lake just north of Houston – Kurt Larsen, Mike Booth, George Toma and myself. Sent along a selfie of the crew that day that included puttering around, some swimming and lunch up at the lake. We later adjourned to my house for a grilled dinner and more K.P. stories. But we were able to add one more to the group as Mike Curtiss was able to join us as well for the evening as the vessel traffic in Houston allowed him a bit of a break. We are hoping to rope in a few more classmates in Houston as we go further down the road, since Al Reeves, Mark Salinas and Tom Lightsey are also here.

Brian Foy continues to meet up with classmates regularly:
Hey Ray…I made it back to Homecoming this year and hung out with Chris Cioni, who was in town from the left coast visiting family. We walked the campus on a picture-perfect day, visited the Memorial Arbors (thinking about our deceased classmates) and even toured the Kings Pointer. Chris got to spend some time with his Dad, who was ill and has since passed away as of this writing. 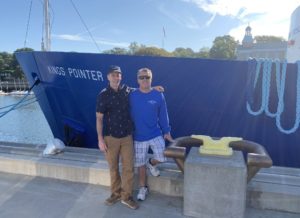 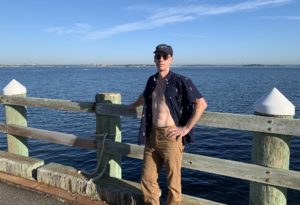 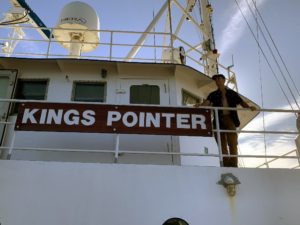 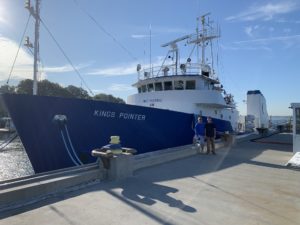 While I was recently in San Diego, I reached out to Del Lewis and we met for breakfast. Del is doing great and says he occasionally sees Dan Baerman, who also lives in the San Diego area. Del and I reminisced about our years at KP, including plebe year in 5th Company, where the fun all started. After San Diego, I headed back to Washington, DC – my home away from home. I have been in touch with Sean Connaughton and Lee Forsgren and we are planning to get-together once our three schedules properly align.

I plan to spend the holidays at home in St. Augustine. If any classmates are passing by on their way to points south, give me a shout!

Mickey Cunningham spent lots of quality time with his daughter Sarah:
September 7th our youngest was married in Philadelphia with a strong showing from KP grads. From right to left are Barb and my cousin John Coleman ‘78, John and Donna Carbone, Mike and Jeannie Keane, Jim and Anne Quern, me and my wife Mary Kay, my sister Cathy Kirby and her son Aidan (Kevin Kirby ‘94), Kent and Julie Morton, Jim Goulden. In spirit and missed by all was John and Elaine Rhatigan who were unable to join us.


Erin Gantt was the first to alert me that Rich Colonna appeared in the CBS Sunday Morning show on 11/10. Link is on our website for “We, the People: Mary Whyte’s portraits of 50 veterans from 50 states” Rich appears at about 5 mins 18 seconds into the story and he is one of the 50 veterans whose portraits are in the exhibition.

May our whole class have a super holiday season and great start to 2020!