A.J. Murphy writes:
While in the San Diego area end SEP, I was fortunate enough on timing to be able to have dinner with Dan Baerman as well as Del Lewis. They didn’t know that they are almost neighbors! It was great to catch up with Dan as he has had a lot of exciting adventures in his career and Del always has interesting endeavors under way. We all agreed that our ’83 class section of news is moving way too far to the back of the Kings Pointer!

Skip McAloon writes:
Roger Foster, who is still employed with Bath Iron Works in Maine, was in New Orleans recently. He was temporarily consulting on the construction of a Navy vessel in Mobile, AL and came over to New Orleans to spend a night. I went to dinner with Roger and Jim Quern and after dinner Roger and I went to Rock-N-Bowl. It was a fun evening. We tried to get Frank Liantonio to join us, but as usual, he dug deep into the bag of lame excuses and declined. Maybe some day.
You should contact Scott Brueggeman, I bet that he has some news!
P.S. Captain Rudy Lupton is about to move to Japan to take command of a giant Navy ship, the name of which escapes me. He will be there about 15 months.

Frank Liantonio writes:
I’ve been living in the New Orleans area for 26 years now. Kim and I will be married 20 years next February. Our daughter Marissa will graduate from high school next May, and our daughter Gianna is in her freshman year of high school. They keep us busy, but we’re blessed with children much better behaved than their parents were (are). Just don’t tell them. Both do very well in school and are on the same school dance team. We’re very proud of them, but I’m very sure I’m not wired for having two teenage daughters. Thankfully, it’s only temporary. I’ve been practicing law at the same firm for the last 21 years since I graduated from Loyola Law School in New Orleans. It’s been an interesting ride most of the time.

I see Anne and Jim Quern regularly. Our daughters all go to the same school, so Jim and I have an annual date at the Father/Daughter Banquet each December. Their daughter Maureen and our daughter Marissa have already been accepted to LSU next year and will be rooming together. Until this past season, I had been coaching their daughter Kelly in soccer since she was about 6 (she’s now 15), even after my daughter retired. Their boys, Kevin and Tommy, are in 11th and 8th grades, respectively, and we hear rumors that Kevin might consider Kings Point. Not sure KP is ready for a third generation of Querns, but we’ll see.

Jim and I had dinner with Rick Boudiette recently while he was in New Orleans for a meeting with ABS. Rick and his wife Lisa are living in the San Francisco area and he’s still working for Chevron Shipping. He’s still hoping to return to playing hockey, but work keeps getting in the way. As usual though, we had plenty of laughs. I guess we’re maturing a bit though, since we all knew it was time to leave the pub when they started auctioning off the waitresses for some charity. After a couple of them pranced onto a pool table converted to a stage — it was pretty tacky, even for us; perhaps if they somehow installed a dance pole we might have stayed (OK, we would have stayed) — we knew it was time to go. Rick said he sees John Diegoli occasionally and that Dan Baerman, who is still in San Diego, has threatened to get together for a golf weekend. Rick also said he saw George Toma recently and he was doing well and still living in Phoenix.

I run into Skip McAloon occasionally since we work just a few floors apart in the same building. He’s also doing well and “loving the law.” He’s tried several times to plan a get together with my family and the Querns, but coordinating schedules has been impossible. Plus Jim doesn’t return email, which is a bit of a logistical problem. Skip, Jim and Keith Jarrett (’80) played in the Blue and Gray golf classic in October, but I didn’t hear much other than rain precluded a full round.

I talk with Joe Burton pretty regularly. Joe and Cindy are still on Long Island. Their oldest daughter (and my God daughter) Sarah graduated from high school in 2009 and started at C.W. Post in the fall. Son Patrick and daughter Laura are also doing fine. We weren’t able to get together while my family did a quick trip to Long Island over the summer, but all is well.

Maureen McKeever writes:
I am still at Dish Network, training customer service agents. I got to go to Denver in January, which meant I missed the worst of the winter weather in Pittsburgh and had warm days. I found a Steelers bar to enjoy the AFC Conference and the Super Bowl games with all sorts of Steelers fans. The summer was spent with visits with family and going to Pirates games. In October I traveled to Massachusetts to visit my brother and go to Provincetown to see the ocean. My oldest nephew is a senior in high school in Lancaster and he and his siblings are in lots of theater productions at school. The younger two were extras in Spiderman 3 a few years back! My parents are doing well and are currently on a cruise to the Caribbean.

Duncan Leach writes:
as a “no longer official KP-83 -er” I may not rate for the “Pointer”, but if I do, I’m living in the Albany, NY area, have 15 year old twins and teach special education at a local school district. Thinking about many of my old KP friends these days and want to say hi to all!

Carrie Rohde writes:
Dan, myself and the kids are all doing well. We had some fun a couple of weeks ago at a High School Sailing Regatta at the US Coast Guard Academy. As many of you may be aware we have 4 children from ages 20 to 13. Our oldest Krysta now attends the US Coast Guard Academy. Our two younger daughters Devon age 16 and Dana age 13 recently sailed in a regatta at the Coast Guard Academy. Dan being always prepared, a trait he aquired at KP traveled to the event with a KP burgee tucked in his duffle bag. You know you never want to leave home without one. Anyway after the event was competed he proceeded to run the KP burgee up the
flag pole at Jacobs Rock (Coast Guard Sailing Center). He of course had lined up an army of photographers to capture the moment. It’s a good thing Krysta now a 2/c cadet, was not too embarrassed by her Dad’s antics. Attached is a picture of Dan, Myself , our two younger daughters and two friends with the KP burgee proudly flying. 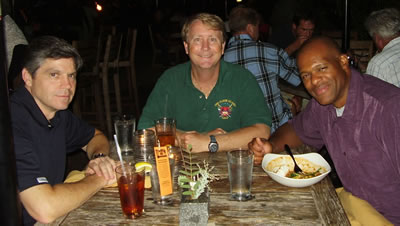