Chris Thayer and his assistants did a splendid job on our successful Homecoming weekend and Scott O’Connor coordinated a noteworthy fundraising campaign for our class gift to the Academy. Many other classmates contributed to the events, and I’ll mention just a few…

Eric Wallischeck played host to our tailgating party in his perfectly located backyard.Erin Gantt’s singing of the National Anthem before dinner was inspiring. Lynn Craddock-Melin traveled from Alaska, but Kurt Larsen came all the way from China!
Big thanks to those whose companies donated to either our class gift or our homecoming party fund. A special shout out to my old roommate Matt Bucherati for Pepsi’s contribution. I had to sneak in a Diet Pepsi between beers in Eric’s yard. I was lucky enough most other of my best buddies in attendance too, including Brian Foy, Mickey Cunningham and Maureen McKeever. Besides his wife, Chris Cioni brought his sister, who often drove him back and forth from home to the Academy way back when.

If you haven’t already, view pages of photos and the list of attendees at http://www.StillConnected.com/kp83 It’s all there—Dave & Buster’s, tailgating, football game march-on, dinner. (Our class has many wonderful photographers.) Then see the Classmate Info page for fresh comments. If your buddies aren’t listed, encourage them to drop by. I didn’t take notes for a detailed account of the reunion festivities, but more comments are at the site (and are always welcome). Around 100 of us ignored some raindrops during the day and even several minutes of a blackout in the evening to spend plenty of quality time with old pals.

From Scott O’Connor:
“…I want to extend my special thanks to each of you who volunteered to be on our Class gift Committee and worked toward gaining a huge amount of financial support for the Academy.
And the number is…..(drum roll)… $74,816 !
This [was] announced as the the second highest amount for any reunion class this year at the Beat Retreat…
We would have been highest except one person in some nondescript class did a dollar for dollar matching with his entire class, on a dare, to the tune of about $40k! We did good….”

In other news:
On June 5, 2008, Roger Foster was one of three BIW engineers who were honored with “Engineering Excellence and Innovation” awards.
Rex Gundle recently relocated from Panama: “I have moved again and now freezing my tires off in Holland.”
Tom Lightsey writes: “Sorry I missed the festivities.”
Yvette (Smith) Pigott writes: “Wish I had made it but I’ll try next time.”

Ray’s bragging:
In October, I ran my 14th marathon (in Newport, RI) and am training for the “Goofy Challenge” at DisneyWorld in January. I’ll run a half marathon on Saturday, followed by a full 26.2 on Sunday. On Monday, I’ll do lots of sitting on any ride with a seat.
Keep writing!
—– Ray Christensen 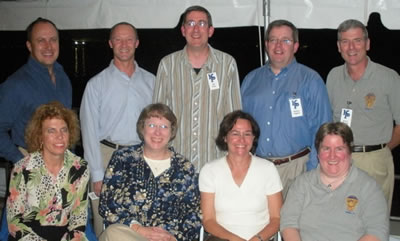 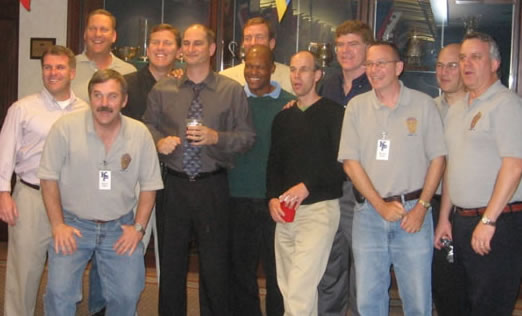 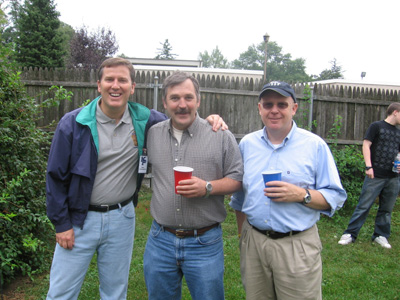