Frank Liantonio starts the party with a photo of Rick Boudiette, Jim Quern, himself and his oldest daughter Marissa at a couples baby shower at his home in April.
“She’s due in June, and Kim and I are excited to welcome our first grandchild. We also have the wedding of our daughter Gianna to look forward to in January of 2022. It is nice having Rick in New Orleans full time, now that he has finished serving his time in Angola. It’s also pretty impressive that the three of us at least got one part of the “uniform of the day” right — the reunion issued rain jacket!”

Brian Foy can always be counted on for a full report:
Ray…greetings from sunny St. Augustine my fellow USS “Tuna Boat” alum! After 13 months of being “stuck” in Florida, I made my first trip to DC the week of April 19. That trip coincided with the KPI OceanConnect Blue & Gray Washington, DC Golf Outing, held on April 21. That’s where I ran into Chris Thayer, Mark Smith and Bob Ross (see pic). While Mark and I worked the event, Chris and Bob “tore up” the course…literally. A cold front passed through and lowered temps to the low 50’s with steady 30 mph winds. It was a chilly day to say the least. I hope Mark weighs in to tell you how he has become an expert in the art of hitting a marshmallow off a golf tee! Mark is retired and loving life as a Grandpa; Bob and Chris can see retirement “just over the horizon.” It was great to see those guys.


On my drive south back to Florida, I stopped in Richmond to see Sean Connaughton, a fellow 5B plebe, and we toured his empire at the Virginia Health & Hospital Association, where he serves as CEO. By all accounts, Sean is kicking ass and taking names in Virginia Healthcare. He still lives in the DC area and commutes to Richmond every week. Joining us for dinner was Art Espey, who I had not seen since graduation. See pic. Art enlightened me with his travels the past 30+ years, including some meaningful years in the Marine Corps, which have served him well. He lives in the Richmond area. Lots of laughs and shared memories and Sean graciously picked up the tab.

Several weeks ago, Art Murphy texted me and said that he and his wife were going to make an east coast trip and he wanted to connect. So, while staying in the Jacksonville Beach area visiting friends, Art drove down and met Jim Goulden (coming from Orlando) and I at a seafood shack in Palm Coast. Great times and laughs. Art has finally retired from the daily grind but still lives in Houston and stays active with his real estate empire. Jim is crushing it with his company and has now been in Orlando nearly 20 years. See pic. The real story here is two engineers inviting a deckie to dinner and everyone getting along. Maybe Congress can learn from this…maybe. After Jim left for Disney, Art and I talked about the benefits of Navy Reserve Retirement for another good hour. “Such a deal!” 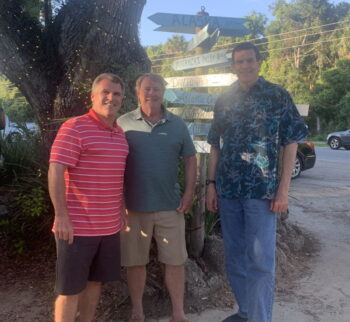 I hope to get back to my regular DC trips after labor Day. Let me know if you are ever in DC or St. Augustine area and we’ll get together. Mark Smith sent a picture from the April DC golf outing that Brian mentioned above. Then in May, he attended the 6 Bears & A Goat Brewing Company reunion, posting photos to Facebook:
Great beer, food and reminiscing. Big thanks to Mark Faller for the hospitality. Great to see Mark Faller, Rex Gundle, Quentin Franklin, Bob Ross, Bill Dunbar and Ed Fairbairn. Ed had to leave before we got the pictures. Should also say thanks to Rex for getting this organized. 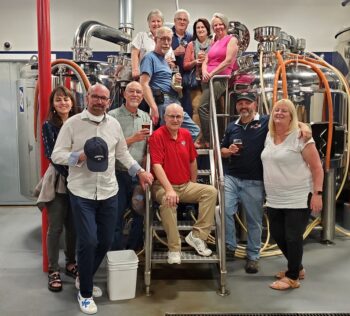 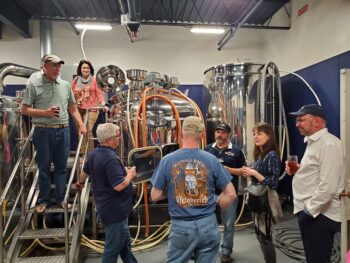 It was a beautiful afternoon and we sat outside and reminisced about KP and jobs and events since we graduated. Lots of laughs to go with the great beer and munchies provided by our host Mark Faller. Mark runs a very nice operation and the place was hopping that afternoon/evening. It was great to catch up with the people that were able to make it. Hopefully next time we can get a bigger crowd. Mickey Cunningham never misses a party:
Jeff Coons’ oldest daughter Kaitlin married Rob Astorino in a garden wedding in suburban Louisville this past weekend. Jim Quern and I rocked the house and made 83 proud. It was great hanging out with Jeff and Sherrie Coons and Jim impressed the grooms family so much he’s now in the Father of the grooms will. Just in case anyone needs entertainment at their next wedding Jim is retired and makes himself available.
Jeff adds, “Turns out they’re making a movie about Mickey and Jim’s visit to Kentucky. It’s called Good Swill Hunting.”

Bruce Garrott announces “I have some great news to share, my daughter, ENS Mikaela Garrott earned her Navy “Wings of Gold” on May 7th @ NAS Corpus Christi. Our family was there to share in the occasion, which was the squadron’s first winging, since COVID restrictions began last year. She will fly the E-6B Mercury, in the fleet.”

Lisa Fields relates:
Gary (’82) and I just had a lovely trip to California vacationing with Brian Winget, Jeff Fout, John and Bob Grimaldi, and their significant others. It is true that the greatest thing to come from our time at KP is our lifelong friends!

Kevin Brofford provides the next generation of military leaders:
Greetings from graduation weekend at the Ohio State University! I am really happy to report that I had the honor and privilege to administer the Oath of Office to my son, Ensign Evan Brofford! I squeezed myself back into my blues and was able to keep it all together for the entire ceremony! (Which was better than I did six years ago when I swore my daughter into the Air Force!) It was a wonderful graduation weekend at OSU, albeit quite soggy on graduation day. Super excited that Evan’s next duty station is Pensacola, Florida for flight school! (Just like his old man!) Quite honestly, this was one of those events that makes me realize how old I really am! I can remember our commissioning day like it was yesterday! Back when we were this young and energetic! Boy does time fly!


Erin Gantt shared “I am scheduled to perform at the Welcome America festival at City Hall in Philadelphia on Sunday, June 27, 2021. I will be singing inspirational & patriotic music in two, 30 minute sets in the afternoon. It was supposed to be the 1940’s trio that I sing with (for 1 hour) but the other two ladies backed out of the commitment.”
Ray Christensen posted the info to Facebook, so maybe we’ll gather some classmates to hear her perform!