View magazine online
Summer greetings. I’m happy to say that a few people have come out of the shadows!

Ronda Cobb writes:
I’m alive and doing well.  Thanks for updating my website for me and creating a new App.  I feel so modern, now! Time has flown and the kids are grown.  Both are married, college graduates, and out in the working world.  And, no grandchildren so far.  I hope everyone else is doing well. 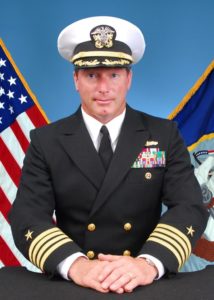 Mark Hoyle shares:
I retired from the Navy as a Captain after 28 years in 2012 [corrected date]. Though I was a “deckie”, the Navy had me in engineering most of my career. After working my way up the chain of command, I commanded the USS Whidbey Island (LSD 41) and we left one week after 9/11 to deliver Marines to Afghanistan. Afterwards, I commanded an engineering training group, and ended my career as the Engineering Chief of Staff at the Navy’s Board of Inspection and Survey.

I now work for a subcontractor in the Newport News shipyard as a Program Manager for the overhaul of the distilling units on aircraft carriers. Easy retirement work.  I have been married to my wife Linda for 34 years and we have two grown kids, Melanie and Jonathan.

Mark Smith notes:
I attended National Maritime Day Ceremony at MARAD headquarters today (5/22).  Got to talk with Brian Foy and Erin Gantt.  Erin performed the National Anthem and was awesome as always.  Lots of other KPer’s in attendance including Dan Turissini and Mike Hokana – 2 of our Indoc Instructors, almost 40 years ago.

On a personal note I will be retiring from Naval Sea Systems Command in June after 35 years working in Philly (4-1/2 yrs) and DC (30+ years).  Looking forward to enjoying life, continuing my association with Little League Baseball and playing with my grandson.

Mark Suter writes:
I’ve been busy seeing a few of our classmates and participating in an alumni chapter event.
My entire family headed to Miami for a few days during Easter week for some R&R and to see Craig Ellixson.  We met Craig for dinner at Boaters Grill in Bill Baggs State Park on Key Biscayne and he also cooked a fantastic meal for us at his apartment.  Gorgeous views from the dock.  We had a great time and of course my sons loved hearing stories about Kings Point, sailing, etc.  Attached picture below from Craig’s dock with my wife Jeanann and me. Craig is doing great and working at the Port of Miami.

While in DC last week, I caught up with Kent Morton.  Kent and I have not seen each other for a long time and we really enjoyed catching up.  Unfortunately we did not have someone take a picture of us so you’ll have to take my word ? that we actually met.  Kent is living in Vienna VA (suburb of DC) with his wife, Julie.  He’s working for Moxie Energy which develops clean energy infra projects.

I also met Brian Foy for breakfast.  Our busy classmate had meetings scheduled that day on the Hill and continues to do a great job for the Academy.  Brian and I had seen each other recently besides the reunion at a NYU/KP Soccer game.

Last but not least, I participated in the service at the Maritime Memorial in Battery Park last Friday in honor of Maritime Day.  Mark Buzby gave a short talk and I had the opportunity to meet the new Superintendent as well as other alumni from KP and Fort Schuyler.  Academy Honor Guard was there and the luncheon afterwards was very enjoyable.

Brian Foy submits a photo:
The one and only Chris Cioni chillin in the hot springs near Mammoth, CA. And rocking the ‘83 USMMA 35th Reunion hat. I propose this go in the next Kings Pointer with a challenge to all ‘83 classmates to send in their best picture with the USMMA ‘83 hat! The Cioni Challenge!
(Published with permission)

Brian adds:
Ray…I hope all is well with the Marathon Man!  In late April, I joined the Myrtle Beach Mafia over three days at Legends Resort.  Lots of exaggerated sea stories and plenty of laughs – all fueled by an adequate supply of adult beverages.  Oh yeah…we played some golf, too.  Bob Ross and I were once again the “guest Deckies” among a sea of engineers, although it was nice to see Quentin Franklin and Andy Dywan stop by. Great to see all of the following classmates: Mike Keane; Jeff Coons; Jim Quern; John Rhatigan, Guy Wilson; Del Lewis; and Mickey Cunningham.  The Deckies once again took down the Engineers in the “match of the year” and we won’t mention any names will we, Bob!  I have attached a few photos for posterity, including one of Mr. Ross impersonating John Daly. 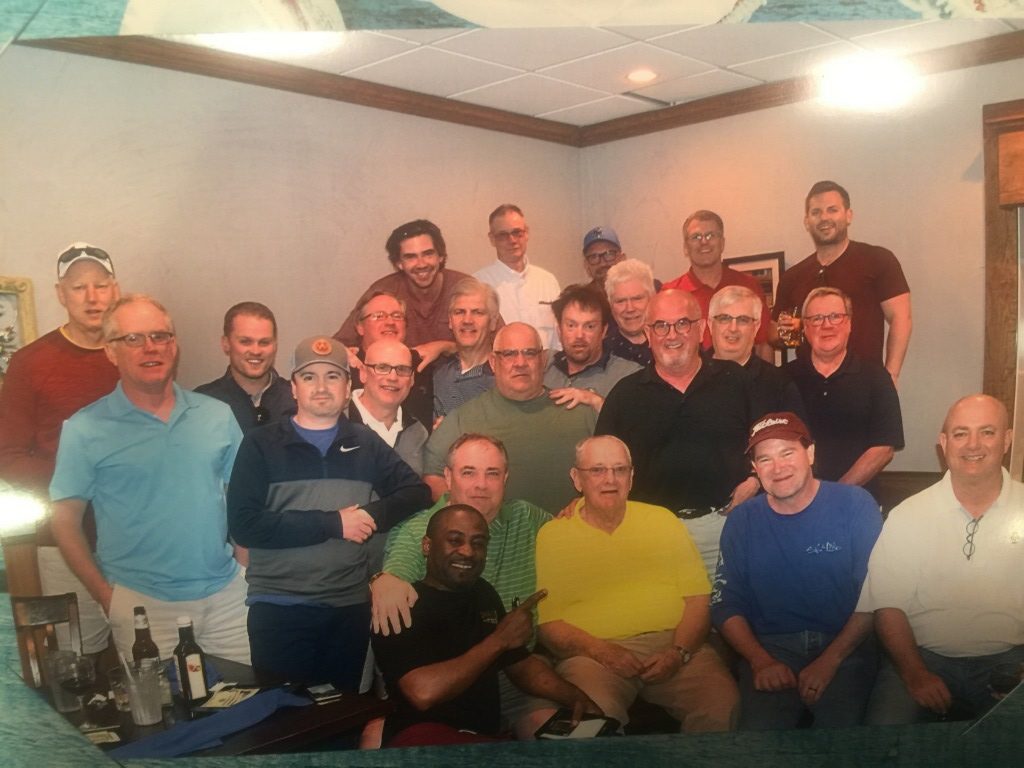 I also ran into Mark Suter in Washington, DC and we had breakfast at the Ritz. Mark is doing well, works for SS&C GlobeOp in the financial world and still resides on Long Island. It was great catching up.  I also recently met Dave Ferchau in DC and we spent one morning working the House of Representatives. Dave and I got a picture with his Congressman, Andy Kim (NJ-3).

If any of you are going to be in DC and are interested in meeting for coffee or want to go to the Hill, give me a shout!

Maureen McKeever reminisces:
I hope everyone has had a great spring! Things in Pittsburgh are good – lots of rain and warm. I am looking forward to my youngest nephew graduating from high school this month. I have been going through old boxes and found some old photos – I took a picture of one, a Plebe dance class. Remember those? All of us girls had to dance every dance, so you think I’d be a better dancer! At least it was a way for us to meet more classmates early in our stay at KP. When I get my scanner working better I’ll send more. I am also sending a picture of me at the Hockey Hall of Fame in Toronto back in 2017. I hope that every one of our classmates and their families are healthy, happy and enjoying life!


John Carbone shares:
May 4th kicked off the 2019 wedding season for this jolly group of KP83’ers!  John & Donna Carbone, Mickey & Mary Kay Cunningham, Jim & Anne Quern, John & Elaine Rhatigan and Michael & Jeanne Keane all joined Jimmy Goulden in Cape May to celebrate the wedding of his daughter Katie.  Needless to say a terrific time was had by all- Stay tuned for more frivolity in the months to come!


Erin Gantt sings:
I received a last-minute request to sub for a celebrity who could not make it on a float honoring Korean War vets for the 2019 Memorial Day Parade.

* I can be heard around singing (where video will start) 1 hour 18 minutes into the parade however, the announcers & short video clips by celebrities drown me out a bit.  I shouldn’t feel bad because the announcers completely ignored Dean Martin’s daughter and 1970s TV actor Tony LoBianco who were also in the Korean War segment.  He was in a jeep but she was riding in a convertible with her name on the side.

Notify me when you do something exciting or get together with classmates or if you’ve got news or email address of  Patricia Dubois, Eric Duepen, John Green, or William Winget, just to mention a few. View color photos at KP83.org.