Scott O’Connor submitted 2 photos from 3/31. He writes, “Coincidence found Sean Connaughton in Jax to attend a Maritime Highways Initiative conference in his new position of Vice President of Government Affairs with American Bureau of Shipping. Bruce Garrott drove up to work at the corporate offices of Coastal Construction Products for a couple of the same days. Brian Foy was between medical society conference calls, maintaining the bachelor lifestyle, his family still back in Oklahoma. We took the opportunity to raise a couple glasses at the local Seven Bridges Brewery and Grille in Jacksonville. Lots of talk about kids and colleges.”

Bruce submitted the final photo from earlier… “It was taken during my final wetting down (CAPTAIN)! The big event occurred on the 31st of January, 2009.”

On May 7, Capt. Scott Douglass held his retirement ceremony after 26 years with the Coast Guard Res.

Nate Reybold recently sailed into Philadelphia but I was unable to get together with him. He writes:
“I’m living in Virginia Beach Ray, working on tow/salvage vessels for Military Sealift Command.The work stays interesting, towing de-commissioned ships, working with Navy ROV’s and side scan sonars, supporting Navy Dive Operations and picking up downed aircraft from the bottom of the ocean are just some of the missions we do. It’s always something different. Right now we’re doing the pre-tow inspection on an ex-navy vessel that we’ll be towing out of Philly on Saturday. I have a Pearson 323 Sailboat back in Va Beach that I get out sailing on as much as the job lets me.”

Matt Bucherati continues to try to get me to visit his weekend house in the mountains of NC. He writes:
“My Daughter Ellen, 22, just graduated from the University of North Carolina at Chapel Hill (you know, the national NCAA champs). She received a BSBA from their prestigious Kenan-Flagler School of Business. Ellen also accepted a position as a Marketing Analyst working for PepsiCo in Purchase, NY beginning this summer. My youngest daughter Rosie, 20, is also a rising junior at Kenan-Flagler as well. She will be working this summer in Kitty Hawk, NC as a hang gliding instructor. She got the daredevil blood from her dad. My son, Adam, 26, is temporarily stationed at Fort Hood, TX as his unit, the 1-130th Aviation Recon and Attack Battalion, completes final work-ups before their deployment to Basra, Iraq where they will be stationed for one year. My son and his wife, Shannon, already have one son, named Matthew, who just turned one. They also found out on the day of his deployment that they are pregnant with their second child whose due date is November 17th. Adam will miss the birth, but his wife lives only a couple of miles from us in Winston-Salem and plenty of other family that will take good care of the family. Everything is well with Sara and me. We have adjusted well to the empty nest.”

Besides Boston Marathon, in May I ran the Broad Street Run 10 miler in Philly (23,000 finishers in each race). But the speedster in our class is Pete LaFontaine. In a recent 4K race, his son Trevor (16) and Pete finished 1-2! Pete’s 5K times, “usually in the low 18:00’s” are still impressive enough to often win his division. Trevor recently ran a 9:55 two-mile and his high school team won the CT State Championship last fall. Pete adds, “My 13 year-old son Connor just won his first one-mile race at his middle school meet with a time of 5:25, and he is posting times faster than his older brother at that age. My wife Judi is still running 5K races – usually winning her age division. Judi is also the girl’s Cross Country coach at our local high school.”

Doug Ullman writes:
”I’ve been with Atlantic Marine since June 2008 as a Project Coordinator for the 240-ft OSV’s we’re building for Hornbeck Offshore. 4 of 6 boats have been delivered to-date with the remaining two due later this year. As you know, there are several Kings Pointers here, although I am the only one involved with New Construction. Prior to coming to Atlantic, I was a Senior Project Manager for a
store package maunfacturer that built and installed casework. I handled projects for Starbucks, Smoothie King, Target, and Einstein Bros. Bagels. I am much happier now that I have returned to my maritime roots! Attached is a shot of my youngest son, Drew, and I at the launching of the HOS North Star (Boat 3) last August.”

Bob Ross writes:
“I had the unique distinction of being the first deckie to join Mickey Cunningham, Jimmy Quern, John Rhatigan, Del Lewis, Jim Goulden, Mike Keane, and Guy Wilson down at Myrtle Beach (The Legends) for their annual golf outing. I had a great time and haven’t laughed so hard since I don’t know when… and that was just on the golf course. Mike’s son, Mickey Jr., joined us as well. He couldn’t get into KP so he had to settle for some rinkey dink college in Maryland called Johns Hopkins or something
like that. One of the golfers there thanked Mr. Rhatigan for his service to our country (check out John’s boonie hat) so that was nice. Guy brought his sky caddie which helped everyone get down to a 2-3 handicap (if Mike is keeping score).

Jimmy Goulden didn’t join us for golf; something about being gun shy after being hit by a stray ball in years past but did join us for cigars and beer. Jimmy Quern was on his best behavior and could easily start a new career as a golf instructor. I have a great video of Mickey hitting out of the sand to within a few feet of the hole. Unfortunately, it was his second shot out of the sand.
I was really hoping that Jeff Coons would have been there to keep everybody under control and well-behaved. I understand that Jeff is a stickler for the rules and etiquette of golf. I plan to attend next year as well and hope that others take Mickey up on the invitation he extended to all at homecoming last year. I also want to offer John & Del at chance to win back their pride
from Jimmy Q & I.”

Jim Goulden adds, “I’m not a golfer, but I try to get up there yearly for the fellowship, beer consumption and cigar smoking. My brethren and I are all well. You’ll notice that Mike Keane is still wearing his Corframs from KP. They make great golf shoes. Had lunch recently with Bruce Garrott. Bruce and I work near each other in Orlando and get together every so often to plan the
conservative take back of the U.S.!” 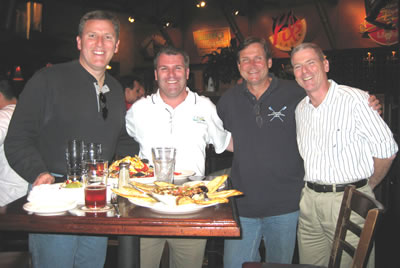 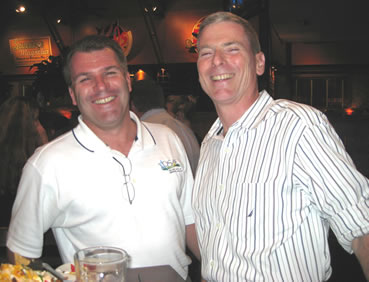 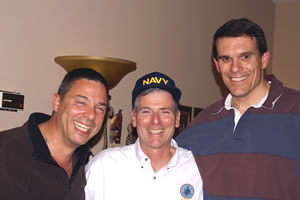 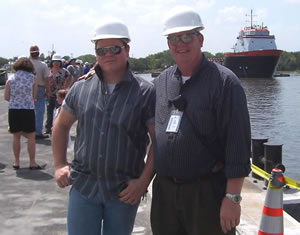 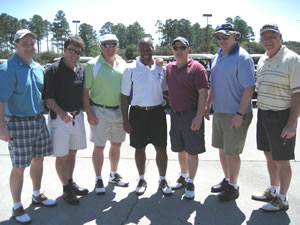