Thanks for staying in touch! With Social Networking sites everywhere (including your ability to post comments and photos at our www.USMMAAF.com class page), I won’t expect anyone to update the list at our class website, but I’ll leave it up there for hysterical historical reference.

Craig Matteson writes:
Here is a picture from this Sept/Oct at KP. Mike Keane, John Rhatigan and myself met Jim Goulden at the Point to hang with Jim. It was nice to visit and super nice that it wasn’t one of our anniversaries in that we could do what we wanted. Many thanks to Mike and Jeanie Keane for their hospitality. We all realized that we need to do this more often.

Mickey Cunningham writes:
Once again we are planning our trip to Myrtle Beach. This is the 25th year we’ve done this in some shape or form and it grows in numbers just about every year. Again, we are equal opportunity in our approach and even let Deckies attend. Bob Ross has been going for a few years and we almost (not completely) forgot Bob was a Deckie. McAloon came last year and spoiled it for Bob as we had just about forgotten. Plus, Jimmy Maloney has been coming off and on for about ten years and, well you know he’s a Dualie. If you can roll with this type of stupid humor and your in!

I’ve been doing quite a bit of traveling this past year seeing many classmates. I spent time in New Orleans and saw Mr. Quern. Jim has found a way to ruin tennis as means of exercise. He claims to be exercising and then lets it slip that he takes a six pack as well. Next thing you know he’ll have a cupholder on his racket. And thanks have to be extended to Frank Liantonio and his wife Kim for keeping Jim’s “drunk calls” to a minimum while at LSU football games. That was funny 20 years ago and is still funny when you do it to Jim (Sorry Ann). The final update on Jim is he’s decided to not cut his hair and if he were to grow a mustache he’d look like a 70’s porn star(except for the other requirements).

I just spent a few days on the West Coast and saw Rich Boudiette. I’ve gotten older and am losing my hair and vision but still do not remember calling him Rick. Sorry Boo Boo. We decided to spend a saturday evening in Berkley and drink all the beer we could at one sitting. The best idea we now use since we are post 40 years old is the invention called the Taxi. It seems like you can drink forever and never have to worry, until the next day. Rich is doing well, still the New Yorker we all loved. We did wonder what happened to Dennis Drummond?

Finally, I spent the last two days in San Diego and caught up with Dan Baerman and Del Lewis. Dan is a hard working Manager at a beautiful power plant in the area and is still the sophisticated individual we all know and love. Del is the President of his own business and was gracious in taking me to an event as he is part of the Holiday Bowl Committee. Thanks again Del. Words of advice, live or retire in San Diego as it is beautiful. So, if in closing if anyone is interested in golfing in Myrtle Beach
drop me an email at

Class Ring Saga: (If you had not heard of this, email Ray to get on list…) As many of you know, Rita in Alumni Office alerted us to the fact that a KP’83 class ring was up for auction on eBay. It turned out to belong to Jeff Bubin, who eventually paid and recovered it after having lost it 25 years ago! (The power of the internet) Jeff reports. “It’s in great shape and so strange but nice to have it back in my possession after all those years.”

The tragically funny part of the story is that soon after sending a group email, I was deluged with
messages indicating that seemingly half of our class has lost our rings over the years.

Scott O’Connor writes:
I guess that ring wasn’t the one I left in an airplane bathroom. Or the first one that I lost in the grass at Eldridge Pool before we graduated. I’ve never been good with rings so I just wait for someone to give me another one – white gold with black onyx, size 11 by the way. I’m glad Jeff got his ring back -amazing. How did he loose it to begin with?

Glenda and I continue to be active with our Jacksonville alumni chapter. I’ve gone the next step and am now on the Alumni Foundation Board of Directors. I’ll take any and all complaints or suggestions for a deductible donation…. The Jax Chapter is looking forward to hosting the KP Rowing team for their Spring Training the first week of March. BBQ at our house 3/6 if you or anyone is in the area. Glenda and I are keeping up with the current classes at KP with Katie ’13 at sea in the engineroom of
Matson’s Maunawili. She’s having a blast and liking the work. Kyle is permanent 3/m on Crowley’s shuttle tanker Blue Ridge. He abandons his dog on our door step when he leaves.

I spent a week in Seattle at Jon Kjaerulff‘s school, taking BST. Old men should not be putting on fire fighting gear and running into burning vessel mock-ups. Jon and Maria, Syd and Bill Sliker and Darcy and Mark Lund all met up for a great dinner before I left. Thanks to Jon and Bill for their great lodging and hospitality. Bill has got us all lined up for a week in BC in August, fishing and partying.

See previous columns & photos at www.StillConnected.com/kp83. If you’re ever passing through Delaware on I-95, call me and stop by to visit my “Beer Room” like Brian Foy did last year. I’m usually here since I work at home. Stay safe.
—– Ray Christensen 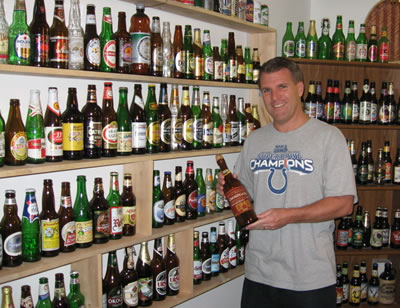