Here are portions of a press release that the Alumni Association forwarded:
”Adams and Reese Partner Frank Liantonio Re-Elected President of Susan G. Komen New Orleans Chapter; Named to Juvenile Diabetes Board. Recently, Liantonio was also named to the Juvenile Diabetes Research Foundation, Louisiana Chapter” – New Orleans Branch Board of Directors, which along with Baton Rouge and Shreveport, works to raise funds in support of the state chapter’s mission while providing outreach and support to families in Louisiana affected by diabetes. At Adams and Reese, Liantonio is a Partner in the Litigation Group, in all aspects of the energy, marine and environmental litigation practices of the firm.

Wendy Greenbaum writes:
After 29 years in shipbuilding I finally got to work on the manufacturing end. I am working on at the work site for DDG 1000, the Navy’s new Destroyer and I am very excited about getting this lead ship built, tested and delivered. It is a technology leap from DDG 51 Class. It a pretty special thing to get to work on a lead ship and not something that happens all the often in a lifetime.

Lee Forsgren writes:
Have only seen Sean Connaughton, George Toma, and Chris Thayer lately. All are enjoying great career success. Sean is doing great as the Secretary of Transportation for Virginia but with it comes a huge amount of public scrutiny. As he said at a recent lunch speech I saw him at he has been called “big & ugly” at which point he reminded everyone there that if they really wanted to see big and ugly that they should look at me. I should have been mad but truth is an absolute defense. His son is now a plebe at West Point and his daughter is entering her junior year at Texas Tech.

George is a client and I have seen him numerous times in the last few months. As President of Transas USA he is turning the company into a marine electronics powerhouse while still finding time to work in Washington State and live in Arizona. He is also doing the Lord’s work with the AZ Kings Point club. He now has two kids in College at NAU and one still in High School.

Chris is growing his empire at MSC and seems to be doing great. Admniral Busby (KP-77) is saying very nice things about him which made me wonder how he has him so fooled. Chris did tell me that his son just enlisted in the Navy and is currently at Great Lakes for training so he has to mow his own lawn again.

George, Chris and I are planning are next trip to Nationals park when George next comes to Washington. (Sean is always invited but his schedule doens’t permit it often.)

Ray’s update: Nobody sent photos, so you have to suffer with one of me taken after I ran a low key marathon in York, PA in May. Send pics for next time or I’ll make you suffer some more. In other news, I recently added number 1,000 to my beer
bottle collection. (How “single” can you get?!) Drop in when passing through Delaware to have a peek. Take care! 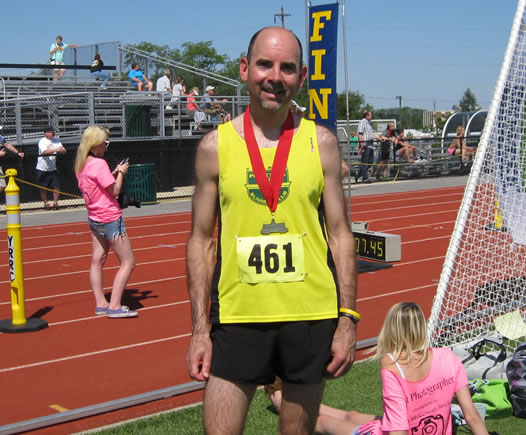